An Exponential Perspective on National Security…

Although I have restricted this blog site to the discussion of DoD IT acquisition, I feel compelled to open the discussion to current issues that could easily trump DoD or even National Security.  At a minimum the current DoD budget environment is a slave to these issues.

For those of you that are following the state of play of the Euro and its relationship to the dollar and other world currencies, I found today’s New York Times article on coordinating central banks very interesting.

This article discusses how central banks are working together to influence global currencies to help ensure international prosperity.  If you have followed any of these ideas you know this to be a loaded issue.

According to the book Currency Wars by James Rickards, in 2009 the John Hopkins University’s Applied Physics Lab was host for an economic war game designed to address the relationship between world currencies and National Security.

In this book Rickards describes how this war game helped educate senior military leaders to the relationship between our currency and National Security and how this scenario is now playing out.

“The financial war game was the Pentagon’s first effort to see how an actual financial war might evolve and to see what lessons might be learned.”  Rickards, James (2011-11-10). Currency Wars: The Making of the Next Global Crisis (Kindle Locations 158-159). Penguin Group. Kindle Edition.

Chris Martenson, http://www.goldmoney.com/video/martenson-presentation.html, in a recent talk, does a wonderful job of amplifying Rickard’s views by explaining the relationship between what he calls the four E’s, economy, energy, environment and the associated exponential relationships, now shaping our global future.  When viewed from this lens, our National Security issues, and the pending budget cuts, take on a new perspective. 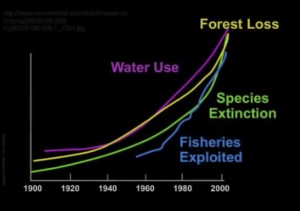 Unfortunately we citizens and our current elected representatives understand little about this economic black magic — implying virtually no chance that they/we will unravel it. Worse yet, we are part of three generations of fellow citizens that believe we should only elect/reelect into office those representatives that promise to provide us more of the prosperity we have enjoyed during the past twenty years.  Hence the recent abject failure of the budget super committee!

The coming years will truly be interesting!  It is important for us all to become aware of the four E’s in which we are living…

3 Responses to An Exponential Perspective on National Security…