The Interesting Thing About Ideas…

“Any intelligent fool can make things bigger, more complex, and more violent. It takes a touch of genius — and a lot of courage — to move in the opposite direction.” — Albert Einstein

In my last post I tried to describe, within the context of Kevin Kelly’s book, What Technology Wants the opportunity and challenge of developing the equivalent of “autonomous virtual” assistants pushing forward near real-time information most relevant to critical command & control decisions.  That we will achieve this over the decades to come, I have little doubt.  In our world of ubiquitous information, the more important question becomes can or will our Nation embrace paradigm-shifting technologies faster than our future adversaries?

One of my favorite recent books is Where Good Ideas Come From; The Natural History of Innovation by Steven Johnson.  Like Kevin Kelly, Steve is fascinated by how we as humans progress using our ability to extrapolate new ways to do things from a background of how we currently do things.  In this book, Johnson dispels the popular myth that ideas come from a smart person isolated in a pristine place, with a clear mind, generating great new ideas.  He argues the opposite!  Research shows that more ideas emerge the more we humans are connected, be that in cities, across professional societies, or across new innovations of the internet such as Facebook and Twitter. Interestingly, according to Johnson’s research, crowded cities actually improve our ability to generate ideas: 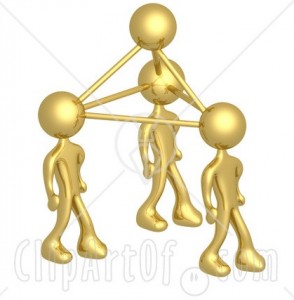 Johnson makes a good case that ideas grow faster as we diversify our interactions and our exposure to people working across a broad swath of communities and technologies. His case is easy to accept when we think about our own human actions.  I can see on a daily basis that I am better at extrapolating an idea from what I am exposed to, than I am at inventing an idea outside the box of thoughts I am carrying around in my head.

Considering Johnson’s theses, that ideas flourish better in noisy diverse environments, causes me to wonder at the wisdom of pushing our National Security systems acquisition activities behind more curtains of security.  In an anti-idea sense, we limit the access to modern tools of productivity behind these security curtains, for fear of cyber threat compromise.   Within these closed security enclaves we are hoping to invent our future high technology weapon systems faster and better than our would be adversaries who are freely roaming the noise and crowding of urban cities and the growing ubiquity of the web!  I prefer to align with Johnson’s argument:

“If there is a single maxim that runs through this book’s arguments, it is that we are often better served by connecting ideas than we are by protecting them.”

Recently I have been helping my good friend and colleague, Bill Vass, with his new challenge as the CEO of the start up company Liquid Robotics. 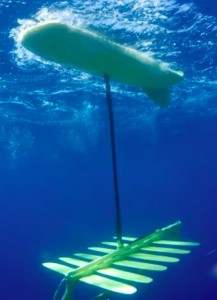 This Company is interesting on many levels, not the least of which is that they are building tools to help use our vast ocean resources more effectively.  After seeing in action the unmanned surface vehicle, they call Wave Glider®, one can easy understand how it converts ocean waves into unlimited mobility. As you can see from the below diagram, or this video, vertical wave motion at the surface float is converted into forward thrust in the below surface sled. Like the wheel, the idea converting waves into forward mobility is amazingly simple when we see how it works, but until now we haven’t had this technology in our human toolkit. 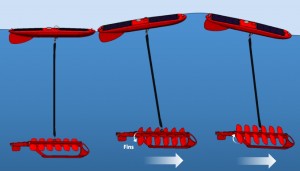 When one considers that Wave Gliders® are capable of freely roaming the 72 percent of our planet covered by water, while sensing and reporting on the status of at-sea oil and gas wells, off-shore wind generators, undersea telecommunication cables, fisheries, regional and port security, and ocean weather, it quickly become obvious that these Wave Gliders® are an idea that reaches the level of a paradigm shift!  By using a combination of wave power for mobility plus solar power for communications and sensor power, these low cost devises are capable of providing the distributed persistence needed to redefine the transparency of our vast oceans and all that they represent.

At the National Security level, the issue now becomes whether we will embrace the paradigm shift of distributed ocean transparency as a tool to protect global commerce and progress, or miss the possibilities provided by this new technology as we continue to expend our energies and budgets on traditional undersea technologies.

… The interesting thing about new ideas is that once shared, they cannot be unshared!!

Post blog note: Given that I am proving that blogging does not fit into by daily discipline more than a few time a year, I have decided to take my son’s advice and work harder to embrace the technology and opportunity of Twitter.  I will attempt to post short thoughts, ideas, or learning’s on twitter at my address of: @marvlangston

7 Responses to The Interesting Thing About Ideas…