Its About the Enterprise, Not the Systems… 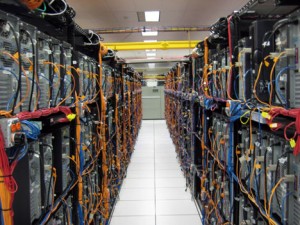 The reason traditional DoD acquisition practices are failing us today is because we no longer build traditional information based systems. Rather than building new IT systems the way we build new aircraft or ships, we evolve enterprise and application capabilities. Said another way, today’s IT based systems are all moving toward virtual storage, virtual computing, and web services or services oriented architecture layers riding atop the network communications infrastructure.  This means that unlike IT acquisition just ten years ago, today’s acquisition is either about building out or improving the enterprise infrastructure or adding new and/or improved functionality (applications) that ride the infrastructure.  In this case, infrastructure means the network communications connectivity, plus the computing and storage capacity to support the foundation software services and application functions enabled by these “integrated” layers of infrastructure.  To fit these enterprise and application improvements into the current acquisition and budget system we mask the improvements as new programs that fit the Congressional and DoD view of system acquisition.

It is time that we fix this situation!!

An easy way to envision an infrastructure is to think of a river that is ever flowing.  Most of our cities were built around rivers because they provide life supporting services to the people living in the cities along the river infrastructure. 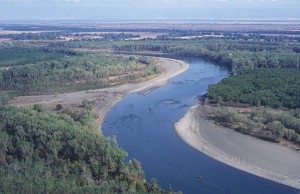 Although people in river cities can shore up the river banks to protect against flooding or bank erosion, they cannot stop the river while damns or other improvements are implemented.  Like a river, we cannot take our DoD infrastructure offline while we add new capabilities.  We can and do incrementally add improvements to increase capacity of the networks, improve security,  add computing and storage capacity, extend the reach, and add or improve applications that are enabled by that infrastructure.

The issue with our current acquisition practice is that we are attempting to use processes designed for an earlier technology when information was processed and passed among semi-independent systems across radio frequency and later wired networks.  Albert Einstein’s famous quote: “We can’t solve problems by using the same kind of thinking we used when we created them,” provides guidance for what is needed to address the challenges we face today.  Rather than building and evolving our future enterprise infrastructure using the current broken acquisition processes, we need to exercise the flexibility built into DODD 5000 to enable incremental upgrades to existing enterprise layers and applications.   The very real challenge is that everyone in the current bureaucracy, from Congress, to senior DoD leaders, to the civil and military acquisition workforce, are trapped by the kind of thinking used to create the current problems.

…In my opinion, both organizations are approaching the challenge from an implicit assumption that the current system is fundamentally sound…

Fortunately there are ongoing National and senior DoD level discussions on acquisition reform.  The Congressional initiative to create yet another law on DoD acquisition under a proposed Weapon System Acquisition Reform Act was touched upon in the previous blog post.  President Obama’s early priorities are well summarized in a brief prepared by The Avascent Group’s work on DoD Transition: Status and Outlook for the Department of Defense. From this, we can see that acquisition reform is one of four top level DoD priorities among Afghanistan surge, program and budget realignment, and Iraq drawdown.

Within acquisition reform the Administration’s priorities are:

– Contain growth in cost and schedule of acquisition programs, and

One can characterize both the Congressional and the Administration’s acquisition reform priorities as centered around better oversight conducted by additional highly skilled acquisition professionals.  In my opinion, both organizations are approaching the challenge from an implicit assumption that the current system is fundamentally sound but implemented less effectively than it could be after a few minor changes.  In other words we are still trying to fix acquisition processes using the same thinking that we used in a previous technology era.

Two recent Defense Science Board Task Forces start to provide ideas for shifting our current acquisition paradigm.  The February 2009  Defense Science Board Task Force on Integrating Commercial Systems into the DoD Effectively and Efficiently, does a good job of describing the opportunities and challenges of buying modern military capability using a greater emphasis on the use of commercial off the shelf, COTS, and government off the shelf, GOTS technology.  This report allows that some new capabilities should be acquired within the existing DODD 5000 process but that much of our military capability can be obtained through rapid COTS/GOTS acquisition using new streamlined processes.  The March 2009 Defense Science Board Task Force on Department of Defense Policies and Procedures for the Acquisition of Information Technology, focuses on why the current DODD 5000 is too long and cumbersome to support the rapid change needed in our modern military forces, and argues, as do I, for a unique acquisition process for information technology.  Neither report, however, provide a practical roadmap for moving us beyond our current thinking.

So what could we do within the flexibility that DODD 5000 provides?  With some needed alignment between Congress and senior DoD leaders, we could:

2. Allocate IT budgets to layers of the enterprise and authorize program managers to expend resources on incremental improvements to programs of record;

3. Recognize that IT requirements are broad guidelines that are specifically implemented through technology pilots endorsed by operational users;

4. Evolve current and new applications as light weight services based upon technology pilots that can be implemented within shared enterprise programs of record;

Interestingly, the above roadmap supports President Obama’s acquisition reform priorities. Future posts will explore each of these options in more detail.

5 Responses to Its About the Enterprise, Not the Systems…