“Offered with full understanding of the challenges and opportunities these issues and suggested solutions represent for the future of America, and for the U.S. Navy’s role in securing that future.”    Dr. Marv Langston – January 1st, 2010

This post provides real-world examples that help validate the potential for significant savings if the Department of Navy (DON) should decide to move aggressively toward wave 3 information technologies. With NMCI ready to contract for Phase-Out services while NGEN is Phased-In, it is important to consider the potential for saving cost while improving the Department’s IT performance.

– Although it will seem unbelievable, this analysis shows that it is possible to bring the estimated current annual $1.7B IT costs down to between $600M and $750M, and easily pay NGEN infrastructure conversion within annual operating budgets…

… making it possible to repurpose as much as $1B annually,  for other critical priorities!

We stand at a time of historical change.  The Chief of Naval Operations, Admiral Gary Roughead, has begun to lead the Navy away from “platform-dominated operations” into “information-dominated operations.” He began this effort by standing up the Deputy CNO for Information Dominance (N2/N6).  This is an historic change!! Unfortunately, during this critical time, POM 12 Budget priorities are forcing sub-optimal decisions throughout the Navy and Marine Corps.  Admiral Roughead’s enlightened leadership, is supported in this area by Commander U.S.Pacific Command, Admiral Robert Willard’s, trail-breaking C2ISR work, complimented by Chief of Naval Intelligence and Deputy CNO for Information Dominance, Vice Admiral David Dorsett’s, C2ISR leadership. These efforts represents the tip of the “Information Dominance” spear which is now, unfortunately, being pushed toward minimal change by the bureaucratic POM 12 budget process.

While this yearly process grinds forward, well-meaning senior leaders, from both the information and platform domains, are making platform-dominated, incremental decisions because it is difficult to understand the speed with which wave 3 information technologies are offering higher performance at lower costs.  An eye-watering example of how wave 3 technologies could displace current IT services can be found within the estimated $1.7B (yes that is billion) annual bill Department of Navy is paying for basic IT services;  shown in Chart 1. 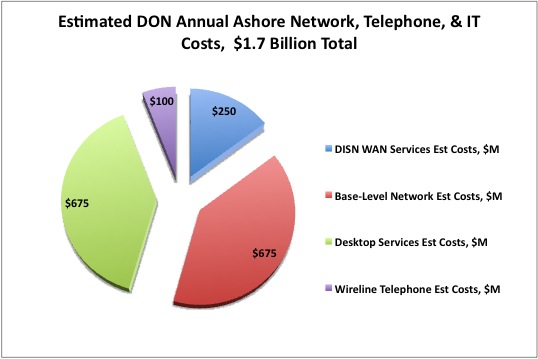 Taken together, this IT infrastructure provides wide area and local network access, telephone services, desktop devices (telephones, computers and personal digital assistants), email, and basic application services to approximately 450 thousand sailors, marines, and supporting personnel.  On average, these costs represent almost $3800 per year for each user. Furthermore, these numbers do not cover the cost of purchasing, licensing, developing, and sustaining other mission and business applications such as command and control, finance, human resources, logistics, etc.; all covered through separate funding lines and programs.

In a previous post, I argue that DoD is losing valuable capability and cost savings by restraining our move from wave 2 current information technologies, into the emerging wave 3 technology.  Chart 2 provides more detail.  This post provides concrete analysis of the potential cost savings possible through, faster rather than slower, wave 3 transitions. 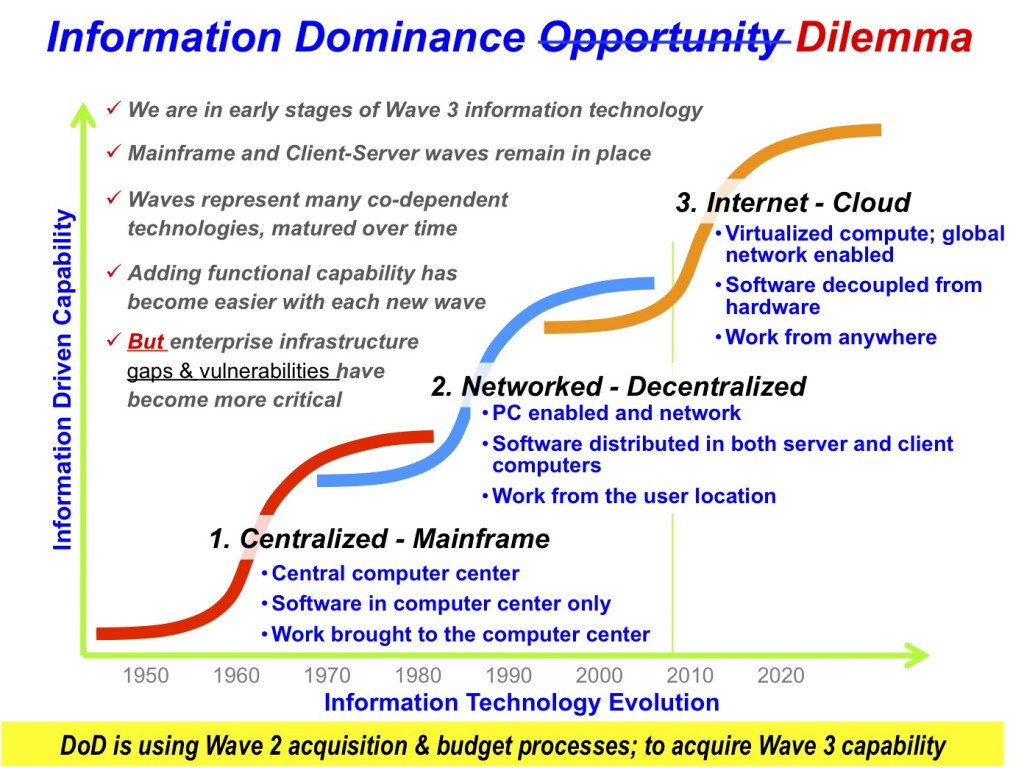 Fundamental Components of IT Infrastructure

In the wave 2 IT paradigm $3800 is a reasonable price to pay for secure, homogenized, basic desktop telephone & computing services.  However, to investigate the potential costs for equivalent or better services using wave 3 technologies it is useful to break the $1.7B cost down into primary functional components of wide area network, wired telephone, base-level network, and desktop services as shown in the Chart 3.  These four primary functions represent the DON’s $3,800 cost of Telephone and IT services per user per year. 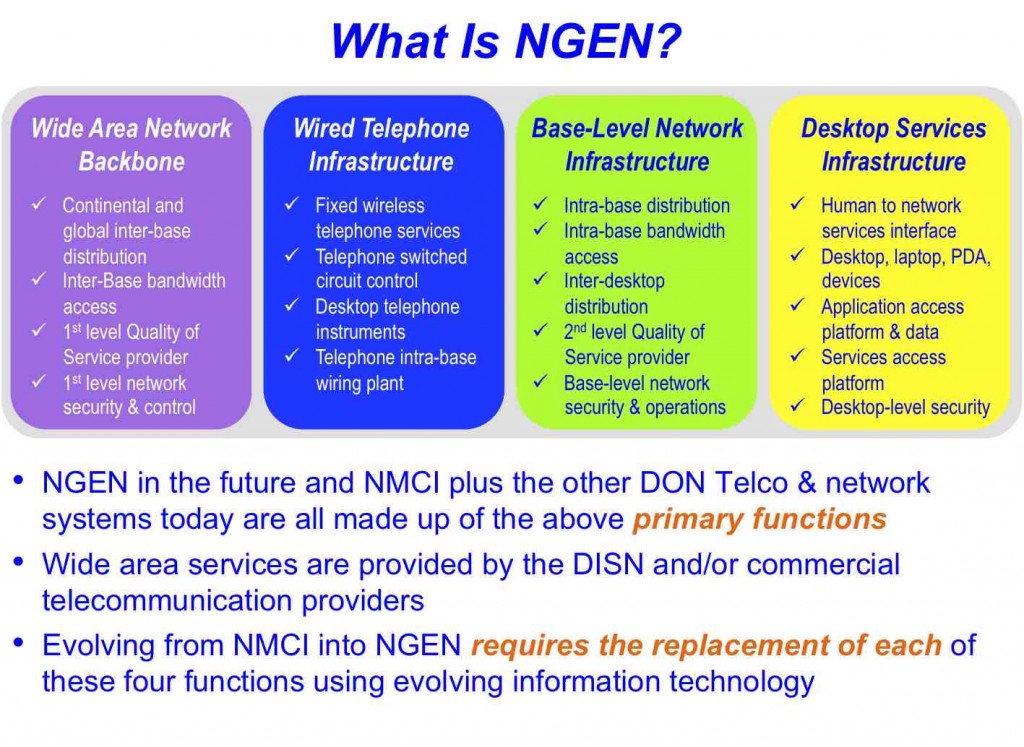 DISN wide area network costs are spread across the DoD Components and, therefore, DON is not authorized to opt out of this service.  If we remove the DISN wide area bill, approximately $250M ($550 per user per year), we are left with $1.45B to cover the cost of wired telephone, base-level network, and desktop services across the DON.  Because the split out is not significant to this analysis, we could assume as a thought exercise that wired telephone services will be absorbed into base-level network, and desktop services.  This leaves the wired telephone, base-level network, and desktop services, as opportunity areas for wave 3 technologies.  Fortunately, these three areas represent over 85% of the DON’s yearly IT cost.

With 4.3 billion wireless subscribers today, on the way to 6 billion by 2013, the global wireless industry is serving over 130 million new subscribers per quarter. Given these realities it is easy to see why enormous wave 3-technology growth is being applied in this area.  An excellent example is the work being done by a small start-up company named Flow Mobile, www.flowmobile.com.  Led by Silicon Valley start up expert, Sree Tangella, and Telco industry expert Dr. Yick Chan, Flow Mobile is currently building a state-of-the-art wireless infrastructure in North Dakota.  Flow Mobile’s goal is to provide high bandwidth fixed telephone, mobile phone, plus fixed and mobile Internet services to both rural and city users for a single fixed price.  Because rural high bandwidth services are not available or relegated to slower expensive satellite services, this wave 3 technology represents a break through in multiple dimensions.  Flow Mobile is a commercial equivalent to the wired telephone and base-level network infrastructure in Chart 3.

But this is still not the complete story! A secure wireless base infrastructure provides two additional solutions to current DON challenges.

Let us assume for a minute that we use Flow Mobile or equivalent wave 3 technologies to provide a secure wireless base-level network infrastructure, at the rate of $100 per user for build out and $10 per user per year for sustainment, across all DON bases.  These rates would equate to base-level network infrastructure services for $45M in the installation year, and $4.5M per year thereafter!  Let’s take a minute to let this sink in. I am suggesting that using wave 3 wireless technologies, DON could replace the Base-Level Network infrastructure across both Navy and Marine Corps for $45M, and operate it for $4.5M annually.  Against the current yearly $675M yearly base-level network sustainment cost, DON could easily absorb the $45M cost to build-out wireless base-level network costs, freeing-up $630M to be applied to other priorities the first year.  In addition, each following year will free up $670M to be applied to other priorities.  Chart 4 shows the potential NGEN Costs for the installation year of wireless Telephone and Base-Level Networks. 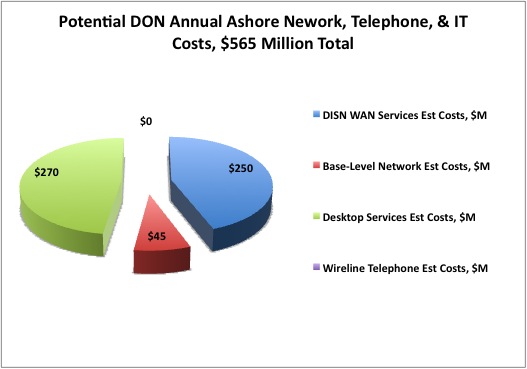 So we see that wave 3 wireless technologies offer cost and performance advantages for the wired telephone and base-level network infrastructure, but what about the desktop services?

Here there are also concrete examples to consider.  Washington DC’s government offices are in the process of rolling-out Google Apps and Google data services to 38,000 employees for an approximate cost of $50 per user per year (www.cio.com/…/Fighting_Government_Waste_One_Google_App_At_a_Time_).  Similarly Los Angeles County Government is finalizing a contract with Computer Sciences Corporation for a Google Apps implementation for 30,000 users at approximately $120 per user per year (www.govtech.com/gt/732223).  Google is currently obtaining full FISMA (Federal Information Security Act) certification for Google Apps (www.federalnewsradio.com › … › Federal News Radio), and is in the process of completing a dedicated Government Google Cloud to be available in 2010 (www.fcw.com/Articles/2009/09/16/Google-Gov-Apps.aspx).  Google Apps represents a full suite of offline/online email, calendar, office applications, plus the server farms from which they host these applications and associated stored user data.  Space and Naval Warfare Systems Command is current operating an unclassified pilot using Google Apps and a dedicated Google cloud to support International Naval cooperation for Pirate Operations.

Assuming desktop applications and data storage services are covered through the use of Google Apps or the equivalent, we are left with 3-year replacement-cycle costs for desktop telephone, computers, laptops, and PDA devices.  If we assume desktop computers at the going price of $500, laptop computers at $1000, and PDAs at $300, we could provide desktop devices, on average, for approximately $150 per user per year.  This assumes a 50-50 mix of desktop/laptop computers and PDA usage across 25% of the 450,000 users. If giving up Microsoft Office in favor or Open Office and Google Apps is viewed as too hard early on, significant savings are still achievable. Assuming the cost of MS Office is approximately $170 per user per year (this should be closer to $50), that cost could be included as desired.  If we add up these numbers we see that the Desktop Services area could be obtained for $270 without MS Office (shown in Chart 4) or $440 with MS Office per user per year.  Chart 5 shows the break out of each service area with and without Microsoft Office.  Here we see that potential annual savings of one billion dollars is possible.  These savings represent annual per user costs between $1,200 to $1,600, down from my current estimate of $3,800 for an 80% to 85% savings. 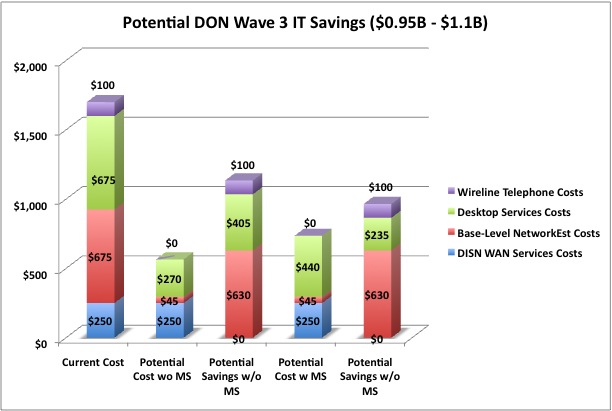 Am I the Only Crazy Wave 3 Missionary?

As extraordinary as these potential savings look, the Navy Research Advisory Committee’s July 2009 Report on Future Naval Use of COTS Networking Infrastructure, provides a rich discussion on wave 3 technologies, which I commend it to your attention.  Copies of this report can be obtained through Office of Naval Research at http://www.onr.navy.mil/.

This report finds that cloud-computing technologies are potentially transformational for Navy, despite the challenges of adequate bandwidth to Naval ships.  Chart 6 provides a comparison of the Bechtel corporation current costs compared to “best -in-class” wave 3 costs.  As shown within the red oval, cost reductions of 25 – 200 fold are possible, depending upon the function.  These large savings multipliers are far greater than the 80-85% savings demonstrated in this analysis. 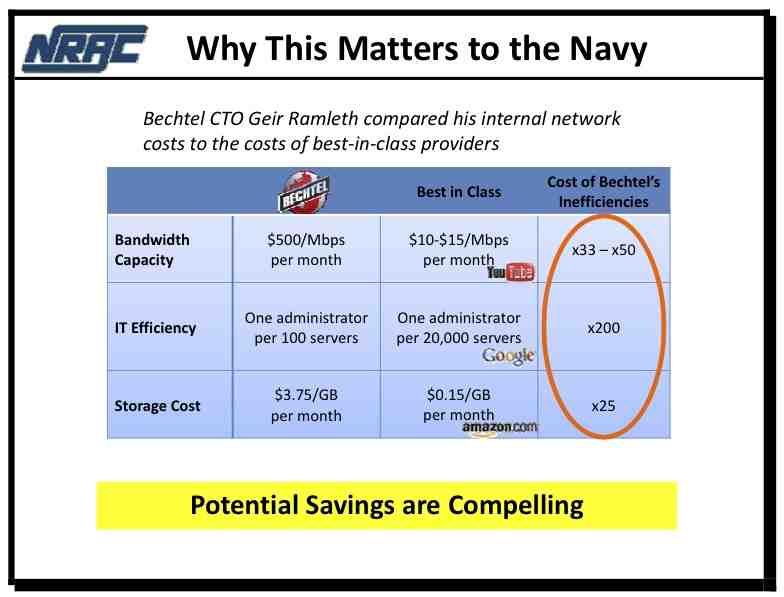 Given the small sample size behind these “back-of-the-envelope” estimates, what might senior DON leaders do with this information?  My suggestions would the following:

In January 2008, I briefed a group of senior leaders chaired by Vice Admiral Mark Edwards (then DCNO for Network and Communication Systems, N6) on preliminary findings from an earlier NGEN Review sponsored by Dr. Gary Federici, DASN C4I & Space.  This briefing asserted the potential for 50% “total cost of ownership” saving for DON telephone and IT services.  I stated verbally my professional opinion that DON could reduce the associated telephone and IT services cost by $500M per year.  At the time, I did not have concrete examples to help validate this assertion.  The analysis contained in this short paper convinces me that I was wrong.  The potential savings are much higher than I had assumed two years ago.  It also helps me understand how fast wave 3 technology is moving forward!

…unfortunately these same wave 3 technologies are also available to our adversaries!!