Why Can’t DoD Buy High-Tech IT While it is Still High-Tech? 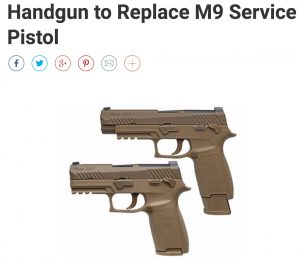 How long does it take the U.S. Army to buy a new handgun? One would think a 90 day market review of the current plethora of commercial handguns could lead to a quick fixed-price contract. Not so; it took them 10 years to prepare a 350 page Request for Proposal (RFP) plus 23 attachments, all released in 2015. After seeing the onerous RFP specifications, American handgun manufacturer, Ruger, chose not to bid. The final $580M contract was awarded to Sig Sauer in January of 2017, 12 years after the program was started.

That is just one example of DoD acquisition processes gone haywire, as described in the May 2017 Interim Report of the Section 809 Panel on Streamlining and Codifying Acquisition Regulations. This panel was mandated in Section 809 of the National Defense Authorization Act, Fiscal Year 2016, and modified in the FY2017 NDAA. Per this statute:

(1) review the acquisition regulations applicable to the Department of Defense with a view toward streamlining and improving the efficiency and effectiveness of the defense acquisition process and maintaining defense technology advantage; and

(2) make any recommendations for the amendment or repeal of such regulations that the panel considers necessary, as a result of such review, to—

(A) establish and administer appropriate buyer and seller relationships in the procurement system;

(B) improve the functioning of the acquisition system;

(D) protect the best interests of the Department of Defense; and

(E) eliminate any regulations that are unnecessary for the purposes described in subparagraphs (A) through (D).”

As the Interim Panel Report points out, despite DoD spending over $300 billion per year on research, development, and acquisition, the Defense Industrial Base (DIB) is no longer a dominant component of the U.S. economy.

Further, the panel cites that DoD dominance in the semiconductor market has dropped from a peak of 90% to only 0.5% today.

Thanks to this Section 809 Congressional statute, our Nation has an opportunity to radically improve DoD acquisition practices. Unfortunately, acquisition regulation and process changes alone, will not address the key obstacles plaguing current DoD acquisition. These obstacles are:

What is interesting is that these obstacles were not present in our Nation’s early acquisition cold-war successes.  Nuclear submarines, Atlas ICBMs, and Polaris submarine ballistic missiles, are some the significant programs that developed winning cold-war capabilities in less than 5 years, from program start to first delivery, under a single PM.

Not generally understood nor discussed is the unintended acquisition consequences triggered by the 1986 Goldwater-Nichols Act!

“In the more than two decades since that time of change… …some within the military services have grown increasingly concerned about some of the effects, perceiving a growing divide between a military-run requirements process and a civilian-run acquisition process—a divide they regard as inimical to the efficient and effective support of military forces.”

The Perfect Storm: The Goldwater-Nichols Act and Its Effect on Navy Acquisition, RAND Corporation, 2010.

So what is this inimical divide? Before Goldwater-Nichols, military Service Chiefs held dominant responsibility for acquisition programs. Because military officers have direct and personal concern about speed to capability, accountability, and effective military systems, they are personally driven toward successful results, not unlike early swordsmen and sword-makers had to be tightly connected.

Goldwater-Nichols, however, removed acquisition authority from the Service Chiefs and placed it under direct control of politically-appointed Assistant Service Secretaries. The senior DoD acquisition Secretary reports to the Secretary of Defense. Even though politically appointed DoD acquisition Secretaries work hard to deliver effective military capability, including those who are former military officers, subtle political pressures from Congress and the executive branch are often more interested in how and where defense acquisition dollars are allocated across their constituencies, and less concerned with delivered results.

With the Service Military Chiefs only able to set requirements, and approve and defend program budgets through Congress, they are unable to significantly influence what is built and delivered. The result has been:

While Goldwater-Nichols was being established in the mid 1980’s, U.S. technology and manufacturing capabilities were growing rapidly, particularly in the information technology (IT) sector. Congress responded with a series of statutes directing the Federal government to buy, not build, all products that would approximately satisfy Federal and DoD requirements.

This began with the Competition in Contracting Act (CICA), 1984, mandating, “the use of commercial products whenever practicable,” and the Federal Acquisition Streamlining Act (FASA), 1994, leading to the military use of commercial computers, and to the Commercial Item procurement change, Part 12 of the Federal Acquisition Regulation (FAR) (FAR is the bible for Federal acquisition). For the first time, FAR Part 12:

Market research is specifically called out in Part 12 because standing DoD acquisition processes rely upon Requests for Information (RFIs) to inform PM’s of available technology and interested contractors. The reality is that the majority of CI companies have no interest in contracting with the DoD because of bureaucratic contract and oversight burdens imposed on them create unnecessary expenses in return for slow, low probability-of-win, contract awards.

Many seniors in DoD argue that their DIB contractors will conduct market research and bring forward the best CI to satisfy DoD requirements. This ignores the obvious DIB conflict-of-interest that bringing forward CI and CI services reduces program dollars available directly to DIB contractors because they rely on unique DoD systems development and maintenance to sustain company growth. In addition, military Service requirements are not generated with an eye toward state-of-art CI capability, and are not easily tweaked across the Service Chief/Secretariat divide despite the commercial IT penetration in all military systems.

“The Secretary of Defense and the Secretary of each military department may enter into transactions (other than contracts, cooperative agreements, and grants) under the [non FAR] authority of this subsection in carrying out basic, applied, and advanced research projects.”

The Defense Advanced Research Project Agency (DARPA) has made great use of OTA, and now military Services are building upon that success to extend this advantage through authorized OTA consortiums, such as C5. The C5 consortium brings together CI and new technology companies to rapidly deliver advanced C2ISR and Cyber technologies for military proof of concept prototypes.

In summary, if the Section 809 Acquisition Reform Panel does not address the key obstacles of (1) Speed to Capability; (2) Accountability; and, (3) Time is Money; modifying acquisition regulations and policies will have little to no effect, and certainly will not “maintain defense technology advantage!”

As long as acquisition programs are measured in decades and not PM tour timelines, the only bright light on the current horizon is taking full advantage of FAR Part 12 CI and CI services procurement along with OTA proof of concept prototyping. These statutes require no change to the current acquisition bureaucracy…

This entry was posted in DoD Acquisition, Technology Evolution. Bookmark the permalink.

5 Responses to Why Can’t DoD Buy High-Tech IT While it is Still High-Tech?