Previously, we outlined in detail areas where China is jockeying for influence across the globe. We’re now positioned to distill the country’s Grand Strategy.

The strategy has three phases. I’ve ordered them in terms of logical priority, but China’s implementing them concurrently. This Super strategy shows features reminiscent of its Taiwan strategy but writ vastly larger:

First, control, then squash internal dissent, whether it be against the monopoly of the Communist Party over every aspect of personal and communal life, from freedom of expression, freedom to organize, economic opportunity, to despair over despoliation of the environment. (The last is worse than a Westerner can imagine: due to rapacious industrialization, deforestation and resource harvesting, the desert has encroached within 150 miles of Beijing, growing at 2 miles a year [52].

The history of the 20th century makes us familiar with the main means authoritarian regimes use to control dissatisfaction and dissent. China uses an old one and a new one on its customary massive scale. The old one is concentration camps, employed in the case of the Uighurs, putting entire ethnic populations under threat of forced reeducation in camps—reportedly holding 1 million people or a full 9% of the population in-camps so large they can be seen from space. Predictably, China has lied about it. [53].

The new one is cybersurveillance of China’s entire population: the use of artificial intelligence to score every resident’s actions, beliefs, communications, and document their every physical move location using ubiquitous surveillance cameras and face recognition. The Party then employs the score to award or deny individuals jobs, housing, transportation, and education [54]. It might be said the technology is crude and thus applied unevenly—but so what, the CCP accomplishes the mission: to cow the population (in respect to which a little randomness probably helps rather than hinders).

(My prediction is that this system will fall of its own weight because, as Stalin, along with Chicago and New York politicians among others, is reputed to have said, “It’s not who votes that counts but who counts the votes that counts.” In this case CCP apparatchiks are handing over power to an army of software dweebs. You know who they’re going to take care of first. Then internal CCP factions will use it to destroy one another; the CCP like all authoritarian parties will undergo a cyber—powered purge of wrong-believers).

China’s population surveillance system is part and parcel of its foreign hegemonic strategy. It’s exporting it to regimes such as Venezuela’s Maduro dictatorship and Ecuador—incidentally increasing its leverage over Latin America. It’s doing the same for 16 other countries in Africa and the Middle East who agree with the Chinese approach toward privacy and top-downcontrol of citizenry. 36 countries have signed onto Chinese guidance for “molding public opinion” for the remaining countries whose governments don’t believe people’s thoughts need to be left alone. [55]. If you don’t believe that data is going to the CCP—and will be used to shape a benevolent attitude toward China, helping the CCP identify allies, enemies and those open to cooption and blackmail in each and every country–I’ll sell you that New York bridge.

The second branch of China’s Secure the Homeland effort is to secure energy and raw materials. We’ve already talked about the South China Sea and Latin America’s appeal as energy sources. And we’ve mentioned the raw materials of Central Asia and Southeast Asia. This is where maritime power projection and BARI play their strategic roles.

Third, a big challenge to China will be food security. As China’s diet westernizes (requiring more cropland and more water and energy intensive farming), crop land disappears under factory and housing construction plus the above-mentioned desertification China has leased and purchased farms in other countries [56]. This is another crucial road for BARI as China will seek to manage its dependence on imported food. [57]

China is pulling out all the stops: Elsa Kania is Adjunct Senior Fellow with the Center for a New American Security in Washington, DC. Speaking of China’s “Made in China 2025” push, she says: …the objective it articulates is for china to become a manufacturing superpower and to move up the value chain in terms of manufacturing, including…a focus on intelligent manufacturing, robotics, electric vehicles. There’s also been [a] launch…of 15 different mega projects…prioritized for advancements by 2030. This…includes …China’s Deep space station, quantum computing and communications. And achieve an advantage at a time when the US has not yet established dominance in these fields. So things like robotics, super-computing, artificial intelligence and autonomy biotechnology as well…China is heavily investing ..to the magnitude of billions or tens of billions” [59]. Huwaei alone is spending $15 billion, growing to $20 billion on R&D including a large proportion in basic science. (Amazon, the R&D leader, spends about $22 Billion, little or none on basic science) [60].

The goal of any conflict among armies or nations is to convince the enemy commander that she has no choice but to admit defeat and bow to the will of the victor. This conviction may be obtained by violence and bloodshed or without. Many analysts of China quote Sun Tzu’s dictum that “The supreme art of war is to subdue the enemy without fighting.” I can’t but agree that this seems to be the goal of China’ Grand Strategy. It is the age-old strategy of isolating the enemy, dividing her from her allies and make the situation so desperate that an easy, gradual surrender seems preferable to a lonely, painful, costly and uncertain battle. Add technological parity and sometimes supremacy and the adversary’s rational alternatives disappear. Not that a last spasm of irrationality might not prolong the conflict, witness the Second World War.

And what if it came to war? As mentioned at the outset, regardless of China’s view of its own history, in this century, no one in the world has the population, logistical depth or armaments to invade China. So that’s off the table. And a fight in the South China Sea, Taiwan, or maritime choke points? The CCP clearly regards its population as a means to an end. It wouldn’t mind throwing as many bodies as necessary into the fray. In regard to its own casualties, no doubt Chinese leaders echo Chairman Mao’s 1957 statement that: “I’m not afraid of nuclear war. There are 2.7 billion people in the world; it doesn’t matter if some are killed. China has a population of 600 million; even if half of them are killed, there are still 300 million people left. I’m not afraid of anyone” [62]. 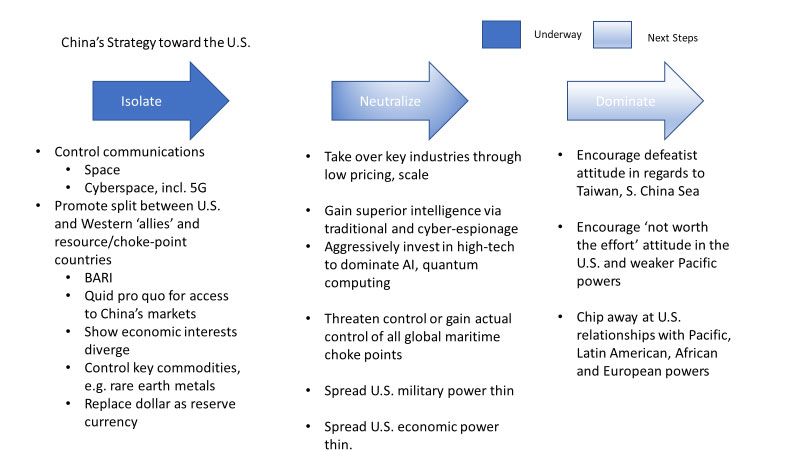 So if China has so much going for it, what can the U.S. do? (Find out in the next post)