Belt and Road Initiative – What?
By Evan Dudik — edudik@evandudik.com

It isn’t just through military and economic growth at sea, in space and online that China is building its grand strategy. Through massive infrastructure projects such as building ports and bridges in small countries like Djibouti and once-powerful ones such as Italy, China is challenging the U.S. sphere of influence.

In an earlier post I stated that China’s strategy includes controlling Choke Point #1, the Gulf of Mexico-Caribbean Sea with the Panama Canal. You could be forgiven for raising an eyebrow at this claim since the Caribbean has been a US lake since the early 19th century. Indeed, one of the strategic aims of the often-deplored Mexican War of 1848 was to thwart European powers (particularly France) from obtaining a springboard for projecting power into the Gulf of Mexico and the Caribbean Sea. In 1917, Germany really got the U.S.’ attention when the infamous Zimmerman Telegram showed that Germany was prepared to fund and arm a Mexican invasion of the southwestern U.S. It’s time now to look at how China is seeking to control the world’s maritime choke points including wresting control of the Caribbean from the U.S.

The U.S. has always been nervous about its southern borders. Since 1800, the U.S. has intervened in the Caribbean and South America approximately two dozen times, including two invasions of Mexico and interventions in Cuba, the Dominican Republic, Grenada, Argentina, Nicaragua, Uruguay, Guatemala, Honduras and Haiti. Most notable of course is the blockade of Cuba during the 1962 Cuban Missile Crisis.

China’s strategy includes a markedly robust approach to loosening the US economic, political, cultural and military links with Latin America—and while China is at it, with US’ actual and so-called European allies, the Middle East, Africa, and Southeast Asia. You have probably already guessed that I’m referring to China’s Belt and Road Initiative, which I’ll abbreviate BARI.

BARI is a $1 trillion effort by China to rapidly create a ‘new silk road’ (another reference to China’s glorious, halcyon past.) BARI was announced in 2013 by Xi Jinping as China’s major foreign policy project for the next 10-30 years. “Belt” refers to efforts to create much improved overland routes primarily between Central Asia and Eastern Europe and China with the goal of creating a Chinese version of a Greater Co-Prosperity Sphere). “Road” refers infrastructure projects that increase China’s influence on global trade sea-lanes.

Overtly, BARI consists in loans to other countries to improve land and sea infrastructures that make trade with China easier. Generally, these are low-interest Chinese government-to-government loans. In the case of maritime “Road” projects, the focus is on modernizing and expanding the quality and capacity of ports around the world, including rail and roadway access.

BARI is a big deal. Over 80 countries now participate to some extent in BARI, accounting for over 40% of global GDP and 65% of the world’s population [37]. China and its new partners have announced projects in Kazakhastan, Indonesia East Africa, the Baltics, and southern Europe. Chinese companies have bought significant stakes or outright control in ports from Rotterdam and Antwerp to  Marseilles, Genoa,  Casablanca, Athens (Piraeus), Istanbul and Port Said/Suez Canal [38]. A most interesting investment is in the Italian port of Trieste, a way to reach the land-locked central European markets of Austria, Hungary, the Czech Republic, Slovenia and Serbia.

The U.S. is not immune to the blandishments of BARI-like investments. In 1997, the US Department of Defense shut down the Long Beach Naval Shipyard. It turned the huge, now vacant base over to the City of Long Beach. Not letting any grass grow under its feet,  that very year China’s state-owned COSCO shipping firm offered to invest $400 million in a cargo terminal, promising $14.5 million in annual lease payments to the City. The US Department of Defense and State Department OK’d the deal which was only scuttled after vociferous opposition by congressional Republicans.  For those convinced that a lease to COSCO could do no harm, that same year, the US Customs Service raided COSCO’s ship Empress Phoenix, seizing AK-47 and other guns destined for gangs on the streets of Oakland. It is perhaps noteworthy that the chairman of Polytechnology, Inc., Wang Jun, was a frequent visitor to the Clinton White House and a Clinton campaign donor [38].

Here’s a high-level graphic overview of BARI. I’m sure China is thoroughly opportunistic in negotiating specific deals, so this can’t be more than a summary of the BARI idea: 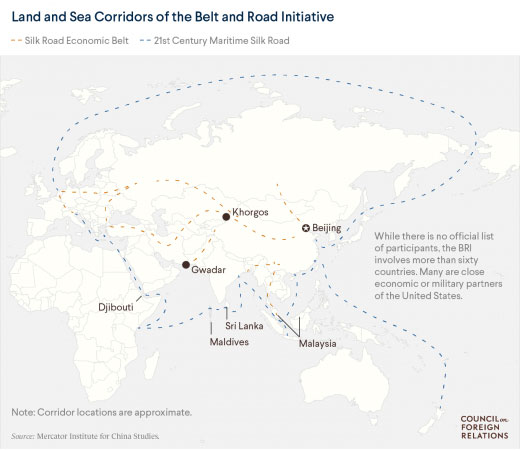 Perhaps you think I’ve got a bad case of Cold War paranoia. BARI’s investment could be innocent commercial transactions, albeit state-coordinated. After all, China must find some way to reinvest the barrels of US dollars we ship to the country for cell phones, servers and sneakers. Can the case be made that China’s BARI investments are valid commercial investments?

So, China gets the land and the project. And the footprint for a future naval or airbase.

This has already happened. “Last December, Sri Lanka handed over a newly constructed maritime port to Chinese government-owned companies for 99 years, after falling behind in payments on over $1B of debt on the facility. Feasibility studies had demonstrated that the new port would not attract enough volume and revenue to pay for itself, but China pushed the deal through. Sri Lanka owed a total of $8B to China-controlled companies at the time of the transfer. According to the original terms of the loan and construction agreement, China would not be allowed to use the port of Hambantota for military purposes, but now that China has taken full control, all bets are off.” [41]

And this: “Djibouti is projected to take on public debt worth 88% of its GDP, the majority owned by China. Last May, construction was completed on the Doraleh Multipurpose Port, a $590M project co-funded by Chinese government-owned companies. Doraleh was operated by China until the government of Djibouti seized control of the container terminals, a move that was ruled illegal by a London court. A Chinese military base is located six miles away from the port.” [42]

China requires BARI projects to use Chinese construction companies and Chinese labor. Labor is a nice term; the conditions amount to perhaps a Fahrenheit degree more than slavery. China is not a signatory to the International Labor Organization’s international conventions. The ILO reports instead that Chinese workers from New York to Saipan to Belarus, Asia, Africa and the Middle East often work under appalling conditions, in effect imprisoned in the host country since their managers confiscate  their passports. Generally, they’re confined to quarters beaten if they protest and required to work in dangerous conditions [43]. In other words, just like home or the U.S. during its 19th century railroad building boom. (The difference is that ultimately the U.S.’ Chinese workers often opened their own shops, and while barred from some trades, made the Chinatowns in many U.S. cities).

BARI is not just a ‘debt trap’ used to catch unwary, naïve or greedy politicians and the countries they run and turn them into Chinese vassals. It is a plank in China’s strategy to grab strategic advantage geographically and financially. And BARI is a data trap. Here’s Australia Strategic Institute’s Dr. Samantha Hoffman again: “I cite in a report that I did for the Australian Strategic Policy Institute in…June 2018… how smart cities technology [is] being used actually in Central Asia or belt and Road initiative project…to collect data. And then that data is, in theory supposed to be sent back to China for analysis to improve the Party’s situational awareness.” [44]

I started this section with the with the claim that BARI is aimed significantly at isolating the US from Latin America, which has been in the US’ declared sphere of influence since at least the Monroe Doctrine, announced in 1823. I claimed also that China’s strategy has zeroed in on world maritime trade check points. Evidence indicates China has chosen the Panama Canal as a target choke point. You may recall that the US handed over ownership of the Canal December 31, 1999 to that amazingly stable country, fulfilling a Panama-US treaty that came into effect on Oct. 1, 1979, courtesy of Henry Kissinger. The Treaty was supposed to build U.S. goodwill with Panama and its neighbors while allowing the U.S.in a pinch to deploy armed forces to defend the canal a la the Monroe Doctrine.

In the meantime, Panama has greatly increased the Canal’s capacity. Now the Canal can accommodate about 85% of world-wide container shipping and 83% of bulk cargo vessels. Many of these vessels will serve U.S. East and Gulf Coasts plus South America [45].

In the next segment, I’ll further explain how the Belt and Road Initiative is a tool for China to develop relationships with world powers – including in Europe and Russia – to carry out its grand strategy.