In Part 1 I introduced a series of eight posts exploring how China has adopted a “grand strategy” to place itself more firmly on the world stage politically, militarily and economically. Here I delve into an important element of that strategy, China’s efforts to assert control of the sea immediately to its eastern shore, as well as Taiwan, its so-called breakaway province.

A good place to start is the disconnect between Xi’s proclaimed desire for  “peaceful external environment and cooperative relations with major powers” and its actions—and rhetoric—regarding Taiwan and the South China Sea. ” If one defines ‘peaceful’ narrowly as the mere absence of a shooting war, this phrase could possibly stand—for the present. And you’d have to define ‘shooting war’ to exclude today’ maritime brinksmanship that risks ship to ship collision and exchange of gunfire. Likewise, if you define ‘cooperative relations with major powers’ narrowly as being willing to take US dollars and Euros in exchange for manufactured goods via a manipulated currency, this phrase could possibly stand—for the present.

We must parse Xi’s “authoritative” statement with surgical care to wonder how peaceful it is to build artificial islands to create military bases in the South China Sea. How internationally “cooperative” is it to build those islands in international and economic zone areas (of the Philippines at least) in defiance of UN Convention on the Law of the Sea (UNCLOS)? In July 2016, the Permanent Court of Arbitration handed down a decision on the case, ruling in favor of the Philippines on July 12, 2016. [3]. How internationally cooperative is it to defy the Declaration of the South China Sea authored by the Association of South East Asian National (ASEAN) and to which China is a signatory?  To date, China has not “cooperatively” or otherwise evacuated the artificial islands it has constructed. Instead it has fortified them, turning them into hardened air bases. As to “peaceful external relations” The Economist reports “growing evidence of radar installations and bomber-sized bunkers made of reinforced concrete. Last month came the revelation that China had installed anti-ship and surface-to-air missiles on three islands in the Spratly archipelago west of the Philippines—far, far from its own shores.” [4].

It would take a subtle observer indeed to maintain that “China now interacts with the international order like other major states” as Professor Thomas would have it.

How does the de facto militarization and occupation of the Spratly Islands figure into China’s grand strategy? We have a clue in the fact that 70,000 ships transit the area yearly, carrying more than half of the world’s international trade. [5] China would dearly love to control the throttle to this trade, now protected by the United States Navy. Control of this commercial transit route would make every global trading partner dependent on the good graces of China. If true to its history, China would probably demand tribute payments. The U.S. provides sea lane protection free of charge.

Nor does China’s “commitment to peaceful development and external cooperation” extend to the second plank in China’s Taiwan strategy. China doesn’t recognize the Republic of Taiwan as an independent nation, maintaining that it is a ‘renegade’ province. The pejorative ‘renegade’ hides the fact that the majority of Taiwanese have repeatedly and recently expressed their desire to remain independent of China. (Same for the folks in Hong Kong, but their train has left the station). In fact, according to the New York Times peace-loving “Beijing has said that any official name change to “Taiwan” would be met with a military attack.” [6]. China has recently forced international airlines serving Taiwan to change their websites to eliminate any reference to Taiwan as a country. [7]. China recognizes only “Taiwan Province, People’s Republic of China.”

Returning Taiwan to the China fold is clearly a goal of China’s grand strategy. Not only has it been a fixture of Chinese rhetoric since Mao Tse-Tung took over the mainland but Taiwan’s geographical location renders control of Taiwan imperative, from Beijing’s point of view. The Taiwan Strait connects the East China Sea and the South China Sea; in non-US hands US ally the Philippines are neutralized—as the US learned at heavy cost on Dec. 7/8, 1941. Most strategists, including those in the US Department of Defense, believe that China sees Taiwan as the biggest and most important element in a future base for projecting power in the Pacific, as part of a “First Island Chain,” ranging from Malaysia to Japan. The “First Island” chain with naval and air bases would serve as a line of defense against an aggressive USA and not so coincidentally as a platform to project power into the western Pacific. We’ve seen this movie before, as the Japanese had a similar concept of defending the Empire via a network of Pacific Islands at the outset of World War II.

Here is the famed consulting firm RAND’s map of the First Island Chain [9]. Note there’s a Second Island Chain China seeks to control. It encompasses the US possession of Guam, an important US base and home to 160,000 U.S. citizens—not to mention embracing the Philippines and Indonesia: 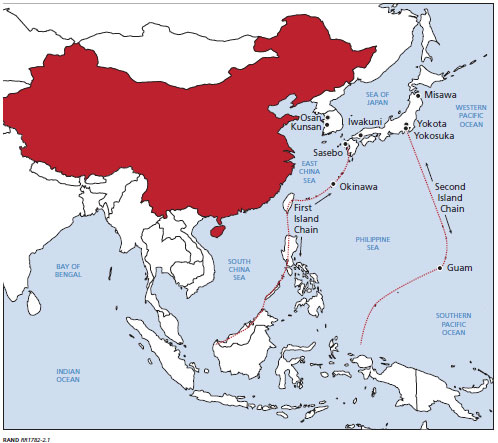 China’s actions to achieve the Taiwan-reacquisition goal of its grand strategy appear to recognize two challenges. Right now, a military attack on Taiwan probably would irritate even the random Trump Administration to launch a military response. The US still retains a fair naval capability in the western Pacific, although the U.S. Congress continues the Obama Administration’s progress in eroding that capability [10]. This suggests that in the short-term, China won’t want to challenge the United States to a shooting war in the Pacific in the near term—whatever ‘near term’ means.

Nevertheless, the trend is troubling. RAND has succinctly summarized China’s success toward neutralizing US power in the region.

An Interactive Look at the U.S.-China Military Scorecard

[RAND Corp, “An Interactive Look at the U.S.-China Military Scorecard”, 2017]

Taiwan today is no military pushover. Opinions differ, but some analysts believe Taiwan could repel a sea borne invasion, or make it quite bloody and expensive (not that blood or expense has ever deterred China over the last 4,000 years), plus excessively difficult logistically for a power less equipped for amphibious assaults than the U.S. [11] Taiwan has prepared itself for the expected barrage of rockets forecast to bridge the 100 mile distance between Taiwan and the mainland. (For comparison, the English Channel at Dover is 31 miles from Calais, France and 80 miles from Dunkirk). Nevertheless, China’s capabilities tower over Taiwan’s, which spends only about 5% as much as China on defense. In many areas China has qualitatively as well as numerically superior capabilities [12]. There’s little doubt China will seek to increase its advantage.

So taking into account China’s policy objectives and Taiwan’s military capabilities and alliance with the US, here are the elements of the Taiwan plank in China’s grand strategy. This plank is laminated from 4 strata, each reinforcing the others:

Through these steps, China’s grand strategy aims to accomplish its goal of reunification without firing a rocket. 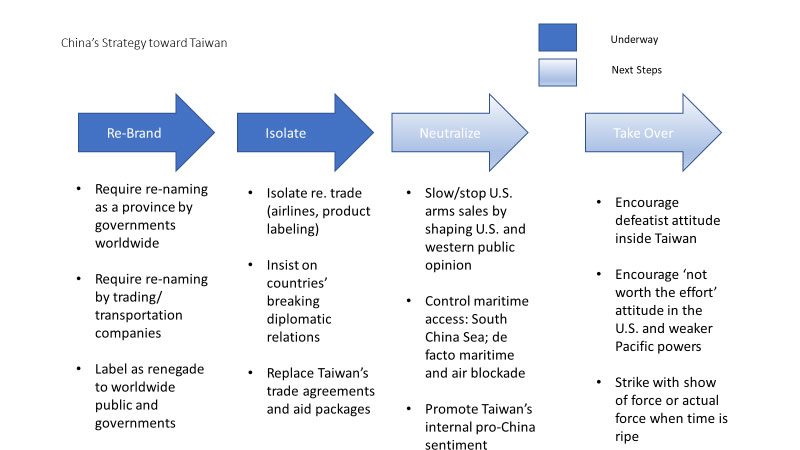 Next week, I’ll look at how the Chinese will seek to deal with the U.S. presence at sea in and space by taking advantage of the Americans’ perceived weaknesses.