An IT Acquisition Joint Game Changer

This post describes an acquisition concept that I am currently proposing for the DISA led Network Enabled Command Capability (NECC) Program. With this concept the DoD could transform current stove pipe system development and acquisition practices into an evolving enterprise capability through an innovative shared-development strategy that could be the start of a true IT acquisition “game changer.”

Enterprise network & computing, coupled with distributed-services technologies are transforming legacy mission and business systems from stand alone client-server systems to virtualized applications riding enterprise networking and computing infrastructure.  Where bandwidth is adequate & reliable, future applications will be provided as a software service thereby freeing operational forces from the complexity of local system installations and life-cycle maintenance.  In today’s complex defense environment it is time to adopt a new concept that will rapidly deliver future capability and reduced sustainment costs to our Joint war-fighters. 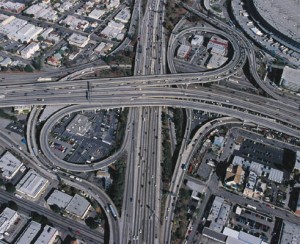 The U.S. Interstate Highway program, arguably, is one of our Nations most successful shared-development efforts.  By leveraging Federal funding with State funding, our Nation has enjoyed a standardized highway infrastructure that is a critical element of our Country’s economic success.  Using a variant of this concept to enable Joint enterprise capability development could change the game by creating a shared-development process to deliver and sustain timely, modern, and Jointly standardized capability in support of our operational forces.

Through a shared-development, centralized-control concept, it is possible to deliver leading edge capability within operational cycles that will out-pace changes our warfighters face on the battlefield.  At the same time this concept can ensure rapid adoption of virtualized, distributed-services technologies needed to pace warfare capability for future forces.  Such a concept could be implemented as follows:

In addition to creating a shared-development, centralized control model, the COI Joint capability would be built up from the set of baselines currently supporting operational forces.  By evolving these COI baselines through Jointly compliant, services technology upgrades, the operational forces will be “assured continuity of capability” plus a continuous stream of new capability each 12-month cycle.

Each COI program would take advantage of any POR or other service-based technology to propose projects that would best support both Joint needs and component needs.  Requested matching funding would represent best estimates of value to the component and overall Joint capability.  In addition, new technology emerging from military laboratory, commercial off the shelf, or pilot development activity could be fed back into yearly proposals in support of COI requirements.  Such a process would begin to break the back of the onerous acquisition oversight process currently preventing rapidly changing information technologies from enhancing operational force capabilities.

Current programs and new start IT systems are not able to pace the changing threat and support warfare needs.  By establishing Non-development Program Managers with matching fund budget allocation, DoD has an opportunity to deliver sustained capability to warfare commanders in a dynamic and more effective shared-development process.  Such a shared-development model has not been applied to information technology mission infrastructure and application programs to date.  Establishing a strong governance process under a COI Non-development Program Office would make it possible to repeat the successful U.S. Interstate Highway model to develop interoperable Joint enterprise capability.  Through assured continuity of current capabilities and aggressive shared-development of future capabilities, our Joint forces, and the Military Component organizations that support them, will be able to meet operational demands and sustain superior warfare capability.

20 Responses to An IT Acquisition Joint Game Changer