Does China Hold the Strategic Advantage?

Does China Hold the Strategic Advantage by Operating Inside the U.S. and Allies’ OODA Loop?

What is the biggest roadblock to a successful U.S. China strategy? Maybe it lies hidden in plain sight. Here’s a sketch of what really is certainly in plain sight:

Heart of Darkness, indeed! It would be nice if this list were exhaustive. Of course, it’s far from it.

The U.S. has reacted with a range of answers, such as diplomatic pronouncements without teeth, economic sanctions, Freedom of Navigation forays, Congressional hearings, Congressional Research Service white papers, designs for a new Navy, efforts to rope in old allies and recruit new ones, and with Johnny-come-lately technology research programs. And sometimes with nothing at all.

But the key word is ‘react.’ That is exactly the U.S. strategic flaw.  The U.S. has ceded the strategic initiative to China. This means China can choose where it wants to provoke and alarm the U.S.

Any adversary who possesses the strategic initiative can create threats faster than a defender can mobilize to meet the threat. When you play defense on multiple fronts you are always playing catch-up, and you rarely know which threats to take seriously. China’s hold on the strategic initiative lets it probe U.S. and western capabilities and resolve without tipping its hand.

China uses its control of the strategic initiative to further its salami-slicing game plan. It uses multiple small intrusions that fall short of what (it thinks) will start hostilities. In the meantime, it increases its military capabilities to raise the price of any military response. When it builds a radar station or fortifies an artificial island against international norms, that’s not enough to provoke its opponents to war. Cumulatively, however, such pinpricks can change the strategic picture radically.

One success at a time increases China’s appetite for more. Having the strategic initiative allows China to exploit missteps such as the botched NATO withdrawal from Afghanistan.

Every Chinese action sends the U.S. scurrying to respond. This takes immense time and effort.  It takes time for the defense and foreign policy machinery to measure the new threat, determine how great it is, develop a response (or choose no response), convince the White House, and convince Congress to take a course of action. In a democratic republic this is clearly appropriate—but our division of powers has its price.

“China has pursued a strategy of winning without fighting, changing the terms of the international order; Russia has combined military and non-military means to alter the map, attempting to change the balance of power and undermining the cohesion of our societies through disinformation. Both are gaining a decisive advantage in information age military technologies.

The consequence has been a succession of strategic surprises, the erosion of strategic advantage and the loss of initiative. Unchecked it is not unthinkable that we will find ourselves vulnerable in time to a fait accompli, where as a nation we have capitulated without a shot being fired.” [5]

Gen. Sanders might have added that China’s rapid-fire surprises both increase the time to respond and dull the response (as the western allies seek consensus). Every ally has its own agenda. This makes it easy for China to divide allies.   For example, many allies depend on China economically. Other allies, especially in Asia, fear the U.S. cannot or will not sustain its Pacific defense. They need to live with their huge neighbor. Even Singapore, a long-time U.S. ally and logistics base for the U.S. 7th fleet has concluded an enhanced visiting forces agreement, a mutual logistics arrangement, and increased bilateral military exercises with China. [6]

The U.S.’ ceding the initiative to China has hidden, exponentially negative effects. The reason is time. While the U.S. is busy trying figure out and gather alliance resources and commitments to counter one initiative, say a Belt and Road port in Djibouti or Ceylon, China prepares another surprise, diplomatic or military or technological. An example is the explosive growth in nuclear capable ICBM deployment and the probability the number of missiles will double, triple, or quadruple, in the next 10 years. [7]

In seizing the strategic initiative, from the Chinese point of view, it’s of secondary importance whether a given Belt and Road initiative or a hypersonic missile or a quantum-computer/Artificial intelligence-based satellite submarine detection system works. The primary goal is to keep the U.S. and its partners scrambling, playing catch up, dividing attention and fragmenting resources.

Col. John Boyd’s OODA (Observe-Orient-Decide-Act) Loop framework, while incomplete, provides a place to start analyzing what allows Beijing to seize and retain the strategic initiative. China profits from having crystallized its understanding of each of these decision-making steps. In the “Observe” phase, China clearly sees U.S. maritime, space and economic power as the main obstacle to China’s achieving its global hegemonic destiny. It clearly has “Oriented” itself as the resurrected Middle Kingdom through its policies to attain maritime security by controlling the world’s maritime choke points. It is also doing so through its aggression in the South China Sea, the Belt and Road Initiative, working to dominate cyberspace and space, tying up foreign mineral resources, investing in leading-edge materials and biological discovery, and reaching for a monopoly of ideological mindshare. It has also oriented itself as the go-to resource for financial aid for Latin America and Africa, strings attached. The “Decide” phase takes advantage of the speed characteristic of any autocratic regime, and through the workings of the Chinese Communist Party China arrives at important decisions with alacrity. More importantly, the “Decide” and “Act” phases intertwine so thoroughly as to be nearly indistinguishable.

Col. Boyd emphasizes the importance of OODA Loop tempo. The higher the tempo at which an institution can cycle through the loop cumulatively, the greater the advantage over an opponent—although he might have emphasized that the quality of effort in each phase is nearly as important as speed. Running through the Loop faster than the opponent yields the characterization of “being inside the enemy’s OODA Loop.” This article argues that is exactly what China is accomplishing.

The U.S., and its western allies in general, are currently cycling through the OODA Loop more slowly than China. This is partly because the U.S. has a lot to “Observe,” given Russia, U.S. internal disagreements and the differing interests of its primary allies. That takes time, and it also takes time to make sense of what is Observed. The U.S. isn’t crystal clear about its “Orientation” in the world; there seems to be only consensus that its role is that of guarantor of the general peace and freedom of the seas. We’ve also mentioned above that the democratic process naturally and deliberately slows down and promotes compromise in “Decisions.” Then when it comes to the “Act” phase, the same processes plus the legacy of history strew obstacles in the U.S.’ path.

However, the U.S. and the west still have some advantages that could act as counterweights to China’s

advantages. There are ways for the west to regain the strategic initiatives. We’ll address those in the sequel to this post. 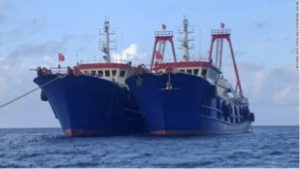 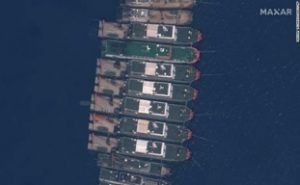 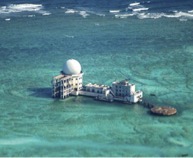 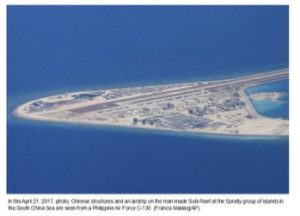 Jeff Himmelman and Ashley Gilberson, The New York Times Magazine, “A Game of Shark and Minnow”https://www.nytimes.com/newsgraphics/2013/10/27/south-china-sea/index.html